Where to Bet BIG During Recessions

We’re in a recession…

And I believe things will get worse before they get better.

As an investor, this might have you spooked. But today I’d like to show you what’s been a consistent bright spot in the markets during past recessions.

If history is any guide, this bright spot could potentially hand you big gains, even as we weather the current financial storm.

Some Investors Are Licking Their Chops

With stocks in a tailspin right now, you might think all investors are feeling the pain that you are. But that isn’t the case.

Some investors are licking their chops over the “profit feast” this bear market is creating.

I’m not talking about short sellers who make money betting against certain stocks.

And I’m not talking about Warren Buffett-type value investors either — those who buy valuable stocks when their prices are beaten down.

The group I’m referring to are the CEOs of some of America’s largest public companies.

You see, even though their stock prices might be in the gutter, it’s at times like these when they can set themselves up for future growth.

How do they do it? Simple: They take advantage of cheap stock prices by buying out other companies. This is Mergers & Acquisitions, or M&A.

According to a recent study from the Harvard Business Review, overall M&A activity tends to dip during bear markets. But since there’s less competition — and since the stock market has fallen — companies are able to buy out other businesses inexpensively.

The thing is, the companies that use this strategy tend to do very well for their investors…

For instance, if we look back at the last global financial crisis, which began in 2007 and lasted until 2009, takeover deal volume dropped sharply. It fell by 31% from the 2007 peak: 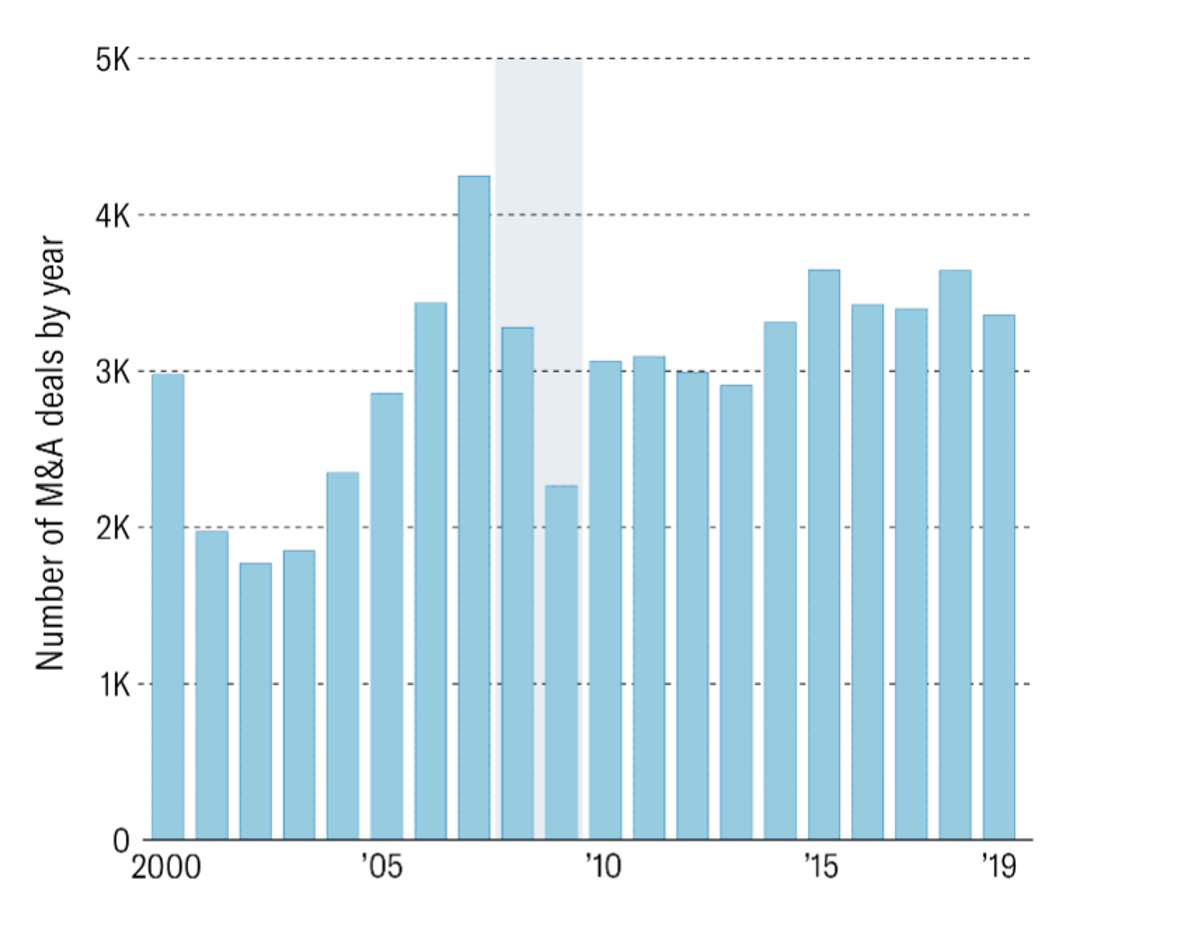 This caused deal multiples and deal values to drop by roughly 40%: 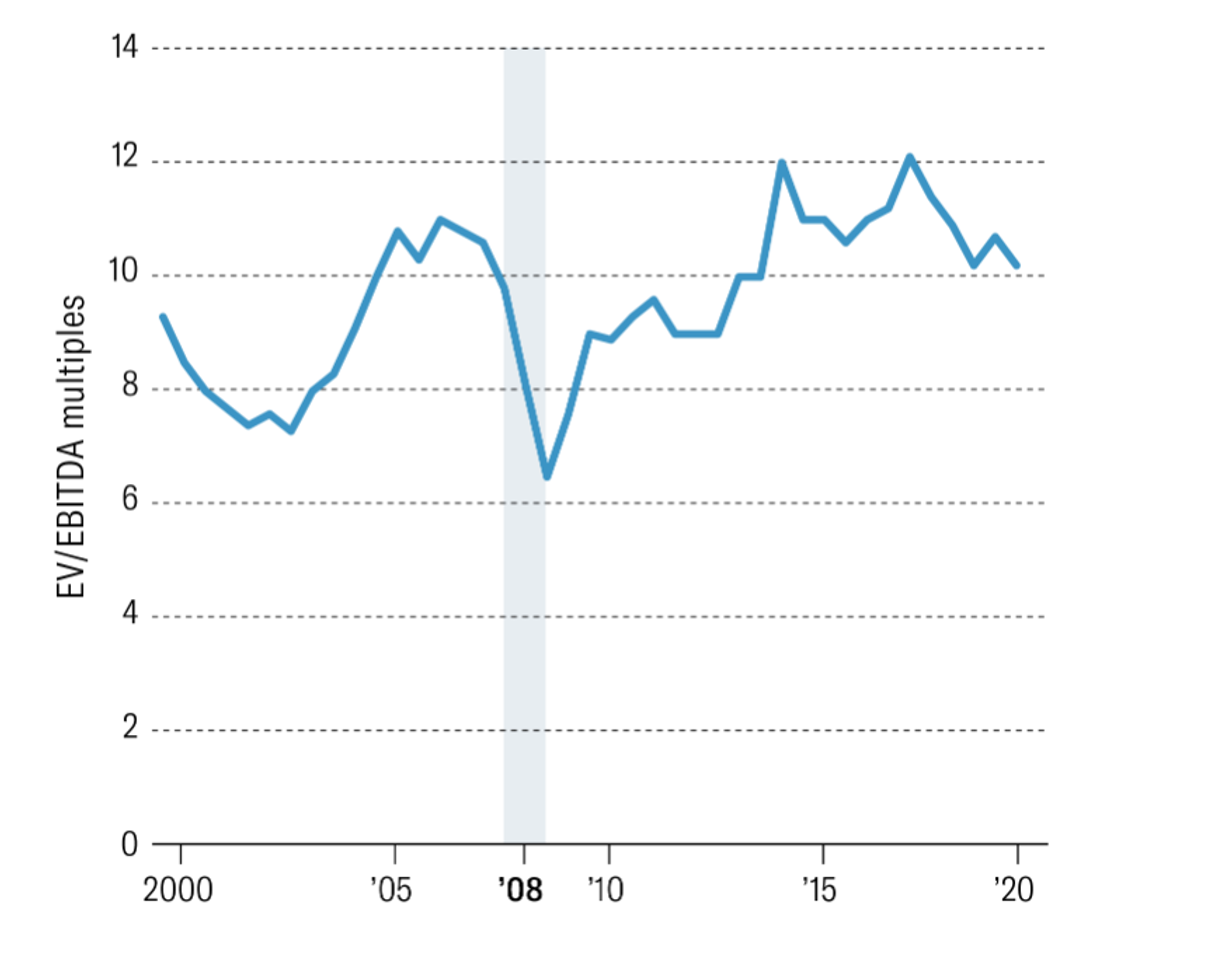 However, this study also made an important discovery:

It found that companies that focused on M&A throughout the downturn managed to outperform the overall market!

But during the same period, these “aggressive acquirers” returned 10.5%.

In other words, they outperformed their peers by roughly 300%.

This data raises a couple of important questions:

Well, according to the Harvard Business Review study, you should look for companies that have been aggressive acquirers historically…

And that have a cash-to-revenue ratio of at least 6%.

Such companies have enough cash to buy up other businesses, and don’t have to take on debt or outside financing to fund their acquisitions.

I could walk you through the details about how to find such stocks, but here’s the thing:

I believe there’s a better way to play this situation…

Instead of investing in the aggressive acquirers…

Aim to invest in the companies that are getting acquired!

And because investors who back these startups generally get in at the ground floor, they can do very well financially when these companies are bought out.

For example, a while back, we told our readers about an opportunity to invest in a startup called Cruise Automation…

But there are things you can do to increase your odds of finding one.

If you’d like Matt and I to explain more in our essays this month, please click here and drop us a line in the comments »

We’d love to hear from you!

Sign-up today and you'll receive our daily insights on early-stage investing, as well as our FREE "Equity Crowdfunding Action Kit" – where you'll learn:

Thank you for subscribing!

Free Guide: Discover How to Invest in Companies Before the IPO…

Just enter your e-mail address below & get this guide instantly

No thanks, I’d like to continue making next to nothing in the stock market.